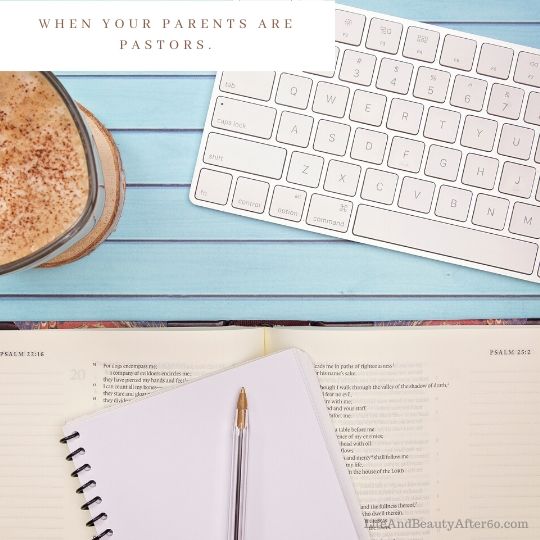 What is your life going to be like when your parents become pastors, you ask? I have read many articles of some pastor’s kids feeling somehow disturbed in their journey, as being the pastor’s kid. My life as a pastor’s kid was so different from what I have read, as I searched google on this subject.

I want to tell my story, as a “Pastor’s Kid”. My parents are currently retired from the position of pastor, as far as being senior pastors of a church, they still pastor. To be clear, pastors whether they are behind the pulpit or not, their ministry never stops.

Start of my journey as a Preacher’s Daughter

Just to begin my journey, I am one of four children, my Dad and Mom raised in the church. My other siblings may have a differing opinion. I think we would not be to different in telling of our journey, as a Pastor’s kid.

My Dad received the call into the ministry, when he was a young man. Whereas, he did not feel adequate or educated enough to be used of God, he refused. Again and again he refused.

Eventually, God put him on his back in a mental hospital. So he could speak with him, again about serving Him, as a minister of the Gospel. We children were not allowed to visit him, while he was in the hospital.

However, the minister who performed my Mom and Dad’s wedding ceremony years ago, came to visit him. He had a missionary from one of the islands with him. The missionary told my Dad, how God had healed him of leprosy. He showed his hands, that showed all the scars. While my Dad still in rebellion, said to him, “If God healed you, why do you have those scars?” The missionary responded with “Would you have believed me, if I didn’t have the scars?”

As a result of his rebellion, my Dad went through so much mental anguish. He didn’t want to pursue what God had directed him to be, that of a minister. Through his struggles, he became super nervous until he had stomach ulcers and could not eat regular food. He had to eat soft foods, like mashed potatoes, bland foods, and baby food. He would not come to eat at the dinner table to eat with the family. Because he couldn’t eat, what we were able to eat.

Mom Held My Dad Up Before God

My Mom was and is, a caring and loving wife, and mother. She endured all the heartache of living with my Dad during his struggles. She trusted that God would bring him through everything. I know it could not have been easy for her. She had four small children that were wondering and asking what was happening with their Daddy. She also had to keep us quiet while we were in the house. Because his nerves could not tolerate us making noise.

But, one day we suddenly noticed, he was at the dinner table with us. We were all eating spaghetti and meatballs, salad and the works! This was his absolute favorite meal. Then he looked down at his hands and realized he had fingernails. He was always so nervous that he bit his fingernails down to the quick. He knew exactly when the least bit of nail was growing back. So seeing the fingernails being normal length, was a wake up as well. We were so happy, as we realized he had been healed from this mental health issue and ulcers.

At that time, my Dad realized that God had healed him and there was no doubt about it. He and my Mom decided to commit to going to church. We were there every time the doors were open. We kids loved it, because we were finally going to church as a family. As they use to send us, but not go themselves.

Mom Taught Us Kids To Sing

As time went on, my Mom taught us children how to sing. We sang gospel songs together and Daddy learned how to play the guitar and then taught my brother. My younger sister, Rita (who is an amazing musical genius), was able to pick up any musical instrument. She would play it like she had been playing for years. She started playing the bass guitar for us. So eventually, our family became a singing family group and we traveled the eastern coast of the United States. Dad started preaching and having revival events. We were blessed to be able to serve God together as a family.

Dad, Mom and us kids kept the church cleaned and the grounds mowed and trimmed, as part of our keep. On occasion, we would get the work, done earlier in the week. So, we could have a Saturday off to have time together as a family. That is, if we were not traveling to sing somewhere.

My Pastor Parents Were First Responders

My Dad and Mom are both, ordained ministers. Dad served as senior pastor of several churches. My Mom served as pastor’s wife, Sunday School teacher, Women’s Group Leader, and Worship Leader. My Dad was the senior pastor for 15 years of a congregation in Tampa, Florida. This is where we were born and raised, as we say.

Dad was a very hands on pastor. By that I mean, he always visited the congregation himself. If they were sick, in the hospital, having a baby, having surgery, a love one passing, whatever the need.

He didn’t have a pastoral pastor or an associate pastor to help him. Basically, because he just loved ministering to the people. Mom was usually with him, so she was right there for them too.

Some people think that being a pastor is a gravy job. You preach two services on Sunday and one on Wednesday and you are free to be. Well, that is not how it was with my Dad and Mom. They were on the job 24/7 and I do mean 24/7. My husband is a firefighter inspector, (first responder) so he is on duty 24/7 as emergency personnel. He works 24 hours and then off for 48 hours, but can be called in at any time. But, my Dad and Mom, when they were pastors; they were the churchs’ 24/7 first responders. No matter the time, day or night, if they received a phone call, they were on it. Back then, they didn’t have mobile phones, just the home phone. But, that didn’t matter, they were always available for the call.

Were We Perfect Pastor’s Kids?

Most people think that if you are a preacher’s/ pastor’s kid, you are perfect. You should always say the right thing and always look proper and be perfect. Well, I definitely tried to be all that. But honestly, you are who you are and it’s just alright. My heart was and is that I always did my best to make my parents proud. I never wanted to bring disgrace to their ministry. Because I love and respect them.

I was a very timid teenager and really didn’t have much to say to anyone. I also thought, if you don’t have anything to contribute, just keep quiet, so I did. Common knowledge then said, that children were to be seen and not heard.

Due to that teaching, I was never one to talk much, then. However, with that said, when told, I was unfriendly and conceited, I couldn’t believe it. I never thought of myself as unfriendly. I simply didn’t have anything to say. Anyway, I made an effort to be more open and friendly and I guess it worked out, I don’t know.

Any Troubles In The Church?

Being a pastor’s kid, I did pickup on things around me and people in the church. Although my pastor parents, never told us anything about any of the people in the church or their problems. I think I have always been a very sensitive kid and I would sense certain personality moods of people.

There are times, when people can be very disrespectful to their Pastor. Disrespect usually presents as an in-mature reaction by an individual who, is use to having their way. Such as, when a decision is made by the staff or council of the church. If contrary to what the individual wants, that individual may retaliate with disrespectful behavior. Anyway, it happens in all churches or groups. Someone finds fault. I am very protective of my family, as are most people about their families.

Thankfully, even though I know there were times, when someone was unkind to my pastor parents. I was never privy to it. For me, this was definitely a good thing, because God had equipped them to handle it. Me, not so much!

As Time Went By

Then years later he was Pastor or Associate Pastor, to other congregations until he and my Mom retired. Dad and Mom were pastors for over 50 years, they were and are a team. Dad is currently 90 years old. He still teaches a Sunday School class, each week at our church we attend now. Mom is 85 years old and continues to support my Dad in the ministry, as a contributor to the class.

Blessed To Be A Pastors’ Kid

I still consider myself, being a preacher/pastors kid. As we kids, were growing up, there were times when were not allowed to go to football games. Mainly, because they had them on Wednesday night/ church night. But honestly, I really didn’t miss anything. There have been many other ballgames, I’ve gone to since, so it made no difference in my life. We had plenty of kids at church, who were our friends. Some of whom, until this day, we claim as blood brother and sister. Because we grew up together and they were around our house, most of the time.

Growing up when parents are pastors, for me was a blessing and still is. I saw my parents grow in God’s will for their lives and because I saw the struggles and the victories. I have a foundation built on my own faith in God. God has proven himself over and over to me and my family. Have there been times, where I thought, ” God where are you?” “Why is this happening?” You know it! Because I am human. But, God always comes through and shows how he knows what is best. He has me in the palm of His hand. What a peace that passes all understanding to know, He has me!

God Has Been Good To Me

God has been so good to me. I am proud to be a pastor’s daughter. I have had disappointments and failures. However, I’ve always known my parents love me, my husband loves me and most of all my God loves me. What more could a person want in their life!

I have 2 posts about how God was on the scene at just the right time!

The first post is about my Dad dying in church and God brought him back to us. This happened a little over a year ago. https://lifeandbeautyafter60.com/2020/04/10/what-happened-when-god-gives-you-a-miracle/

The second post is about how God had my husband at the hospital just in time. https://lifeandbeautyafter60.com/yfirefighterhusbandhadaheart/

God is Great! I hope you will take a moment and visit these post. They are amazing real true life experiences. Allow them to build your faith in who God is and what he can do for you and your life!